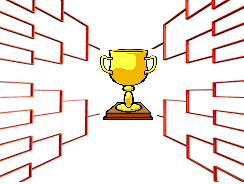 Once seedings are finalized in each Division (click HERE for an explanation of how seedings are determined), games will be posted on the schedule and on Team Websites.  Scroll down for links to LIVE brackets/schedules for each Division.

Note that all dates/times/fields are subject to change, both before playoffs start and also because any disruption due to weather, darkness etc can have a ripple effect on the entire schedule.